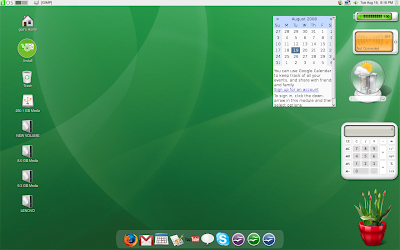 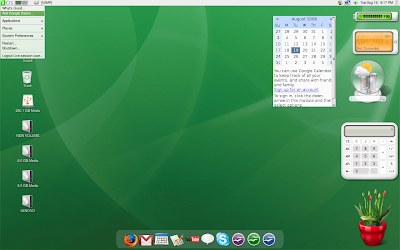 Option for adding Google Gadgets onto the Desktop integrated into the gOS "Start" menu
Another interesting addition to gOS is integration of recently released Google Gadgets (Installation instruction for Google Gadgets on Ubuntu Linux), with the desktop. Google Gadgets provides access to over 1,000,00 Widgets providing you host of different functionality like Weather Information , System information , Google News , Battery Status , Calendar etc on your desktop with a click of button. Addition of Google Gadgets does improve the user friendly index of gOS and makes it even more attractive to Linux newbies. 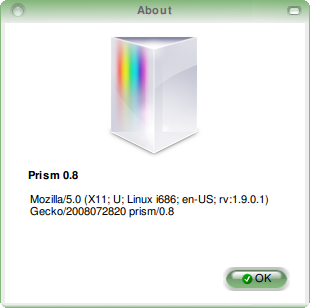 Another change from gOS 2.0 is clicking on any Web 2.0 Application icons , loads the application in Mozilla Prism (earlier called WebRunner) instead of Mozilla Firefox . Mozilla Prism is a innovative new experiment from Mozilla Labs which tries to integrate web platform with desktop experience . This is how Mozilla Wiki (Read more here )describes Mozilla Prism :

Prism is a simple XULRunner based browser that hosts web applications without the normal web browser user interface. Prism is based on a concept called Site Specific Browsers (SSB). An SSB is an application with an embedded browser designed to work exclusively with a single web application. It doesn’t have the menus, toolbars and accoutrements of a normal web browser. Some people have called it a "distraction free browser" because none of the typical browser chrome is used. An SSB also has a tighter integration with the OS and desktop than a typical web application running through a web browser.

gOS 3.0 also includes Wine application layer which allows running a number of Windows application on Linux desktop . Even though Wine is out of beta after decade long of development, still it is buggy and not all applications run well on WINE. So it would be better to run Open Source native applications instead of running Windows based application unless there are no alternatives available.

Overall gOS 3.0 worked flawlessly on my system , and I was able to install it easily on my system with user friendly Graphical Installer. However while shutting down i encountered error(which apparently was being caused by Google Gadgets being closed) for some strange reason , Now i am not sure whether this is a problem with my system only or with distribution.I hope they rectify this when final version of the distro comes out. 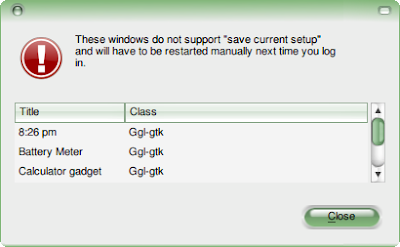 Now even though Adobe AIR and Mono version of Microsoft Silverlight is still in Beta stage and are very buggy, still gOS team might consider including them in future release , since they are positioning their distribution as a Internet/Web 2.0 Applications ready Linux distribution and there are all signs that Adobe AIR and Microsoft Silverlight are going to be extremely important platform for delivering feature rich internet applications onto desktop in future.

gOS like it's earlier version uses the same green theme. Now gOS overall is extremely user friendly distribution that might be particularly useful for people who have old systems and would primarily like to use their system to say maybe use online Web 2.0 Applications like Google Documents , Mail ,Flickr which are less resource intensive compared to local Desktop applications. gOS could also be the right distribution for someone new to Linux , since it is based on Ubuntu and is extremely user friendly and being based on Ubuntu provides easy access to Ubuntu repositories for installing/upgrading additional packages.However for some one already familiar with Linux, gOS provides very little reason to migrate to gOS from the likes of Ubuntu,Fedroa ,Suse .

Overall comparing with gOS 2.0 , there has been number of important changes in gOS 3.0.gOS 3.0 is has become extremely user friendly and feature rich, and is probably one of the simplest distribution available for Linux Newbies to get themselves acquainted with.

June 18, 2008
Even though I am not a fan of audio books and the only thing I use my iPod for is listening music still while exploring Festival(which is basically a General multi-lingual speech synthesis system) I found out that it's very easy to convert normal text files into mp3 using festival . Now this could be especially useful for people who either listen to audio books or people who have difficulty in reading.

Now we need to install voices which would be used to dictate the text (install any one of the following ) :

Now once you have installed festival and voice package we are ready to convert text files .wav files .